VMO Brings You Moonlight and Sunshine with Chopin and Beethoven

VANCOUVER – The Vancouver Metropolitan Orchestra (VMO) will be performing works of widely different character by Chopin and Beethoven in its 2019/20 season opening concert, bringing you moonlight and sunshine on the same stage.

The concert will take place on September 15 (Sunday), at 2:00 pm, at the Chan Centre for the Performing Arts, UBC (pre-concert talk at 1:30 pm). It will open with the world premiere of a new work by VMO’s composer-in-residence, Trevor Ho­ffmann, to be followed by Chopin’s Piano Concerto No. 2 and Beethoven’s Symphony No. 7.

Known as “The Poet of the Piano” and a child prodigy, Chopin composed the F minor No.2 concerto while he was around twenty years old and still in his homeland Poland (before living the latter half of his life in Paris). Written in the “brilliant style” (stile brillante) which was designed to show off the soloist’s dazzling skills, Chopin’s concerto took this then prevalent style to its pinnacle.

Particularly fascinating is the Larghetto second movement, which exhibits the character of a nocturne. It was thus a precursor of the eminently expressive, vastly popular nocturnes that Chopin composed later in his life.

The concluding third movement of the concerto, on the other hand, proudly declares Chopin’s Polish heritage, as the whole piece is brought to a resounding close in the mazurka dance rhythms of his native land.

If Chopin’s concerto leaves us with the impressions of moonlight, then Beethoven’s Symphony No. 7 in A major may well remind us of sunshine. The work as a whole is notable for its use of dance-like rhythmic devices, with extensive use of dotted rhythm and repeated rhythmic figures (in its most daring manifestation there is no melody at all, but simply the repetition of a single pitch).

Richard Wagner, the colossus of German opera, while speaking of the rhythmic vigour that permeates the entire work, characterized the symphony as the “apotheosis of the dance”. He also praised the work for manifesting the power of Bacchus, the classical wine god. In more down-to-earth terms, this symphony is a carnival that celebrates the sunny aspects of human life and is thus a fitting centrepiece for the opening concert of the VMO’s 17th anniversary season. 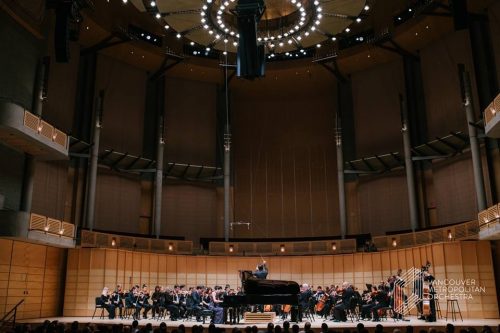