VANCOUVER – A classical symphony orchestra playing popular music is no longer a rare encounter. But the upcoming “Famous Pop Classics” charity concert of the Vancouver Metropolitan Orchestra (VMO) is a true rarity that results from the joint efforts of four unlikely partners.

The concert, co-organized by the Rotary Club of Richmond with the proceeds benefiting the Rotary Foundation and End Polio Now, will take place on November 17 at 7:30 p.m., at the River Rock Casino Theatre (8811 River Road, Richmond). A total of ten pop classics will be performed, with the VMO taking to the stage under the baton of Maestro Ken Hsieh, to be joined by two local bands—Spencer Cheung & His Dream Continues, and Loig Morin & the Band.

Particularly noteworthy is that Loig Morin, a French musician who makes Vancouver his home, will give the audience a big surprise. After his latest album “La Rivière” was released last year, the Canadian musical world was immediately enchanted by its deeply rich French flavour. Ken Hsieh offered Loig to adapt his titles in symphonic version, and co-operation between the two thus began. In this concert you can see the sparkles that result when they work together.

As for the ten pop classics, they are all linked by a common theme, which is, most appropriately, “encounter”. First of all, the immortal “Hallelujah”, by the Canadian singer-songwriter laureate Leonard Cohen, is not a religious piece as its name and lyrics suggest, but rather a bitter lament about encountering and losing someone one loves.

On the other hand, “Can’t Take My Eyes Off You”, a classic love song of the 1960s, is simple and straightforward in depicting the joy in encountering a lover. And “Unforgettable” of the 1950s is a quick sketch of the feelings of love at first sight.

Encountering and falling in love, so much in love that the thought of separating badly hurts—this is a prevalent theme in love songs of all times, as can be seen in the hit love ballad “If You Leave Me Now” of the 1970s, or the Japanese pop song “Missing You” (Anata ni aitakute) sung by Seiko Matsuda—the “Eternal Idol” whose career achieved a second climax in the 1990s precisely because of this song.

Making its debut as early as the mid-1950s, it was not until the early 1990s that “Unchained Melody” achieved real popularity when featured in the film Ghost, which was a story about the bonds of love not even death could sever.

“I Dreamed a Dream” is a lament sung by a factory worker who has just been fired from her job and thrown onto the streets in the musical Les Misérables. While recollecting the sweet old dreams, the song does not fail to mention “love that was blind”, which most probably is love at first encounter.

“New York, New York” is the theme song of the namesake musical drama film directed by Martin Scorsese, which tells of a sad, fruitless love story of a pair of musicians who shortly fall in love after their first encounter in New York. The song was later picked up by the masterful love song singer Frank Sinatra and became one of his signature songs.

Also to be performed in the concert is “Canon Rock”, a rock arrangement of the Baroque classical work “Canon in D” by the Taiwanese guitarist and composer Jerry Chang. At first sight it looks like an odd piece in the programme, but as the Canon has become one of the most popular wedding songs since the 1980s, it must have something to do with encountering a lover, right? 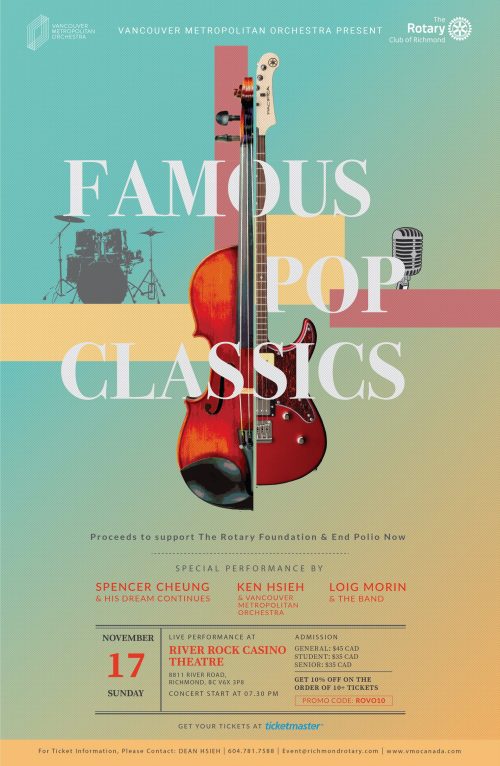 The song “Over the Rainbow” comes from the film The Wizard of Oz, which is based on a children’s novel of the same name. The adventure story in the film depicts how a little girl looks for courage, kindness and wisdom. In our own adventure story which is our personal life, we never know who we are going to encounter, but we all hope for a utopian world over the rainbow. Isn’t it most appropriate to include such a piece in this charity concert of the VMO?