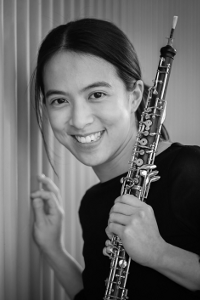 Emily Yu, holds a Bachelor’s degree in Oboe Performance from the University of British Columbia, student of Beth Orson and a Master’s degree from Boston University, student of Laura Ahlbeck. She moved to Mexico to pursue her career as a freelance musician, where she played with numerous professional orchestras in Mexico including the Mexico City Philharmonic, Mexico National Symphony Orchestra , National Autonomous University of Mexico Philharmonic Orchestra, the Mineria Academy Orchestra and she was the principal oboist of the Michoacan State Symphony Orchestra. Since her return to Vancouver in 2010, she has enjoyed playing with various professional ensembles including the Vancouver Symphony Orchestra and the Vancouver Metropolitan Orchestra. In addition to her performing career, she enjoys teaching and has recently received the Arts and Entertainment Management Certificate from the Capilano University. She is currently the administrator of the Vancouver Youth Symphony Orchestra.