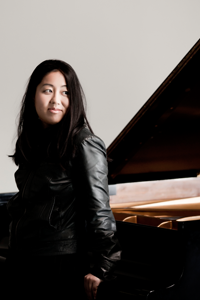 With her superlative technique, sensitivity of touch and profound understanding of the music she plays, Yu Kosuge has become one of the world’s most noted young pianists.

Yu Kosuge has been giving recitals and performing with orchestras since early childhood. At the age of nine she made her debut with the Tokyo New City Orchestra. In 1993, she moved to Europe to continue her studies in Hannover and Salzburg and in recent years has received great support and inspiration from András Schiff.

Recent highlights include performing at the Salzburg Festival with Philippe Herreweghe and Camerata Salzburg, performances in La Roque d’Anthéron with Jacek Kaspszyk/Sinfonia Varsovia, the Japanese premiere of Tan Dun’s Piano Concerto ‘Fire’ with the NHK Symphony Orchestra under the baton of the composer in Japan and a tour with the NDR Hannover Radio SO under Eiji Oue. Stateside, she makes her debut with the Utah Symphony under the direction of Thierry Fischer in Spring, 2013.

In addition to her busy concert schedule in Europe, Yu performs regularly in Japan, where her tours with the Finnish Radio Symphony Orchestra and Sakari Oramo, Seiji Ozawa and the New Japan Philharmonic inspired rave reviews and great public acclaim.

In September 2009 Sony released Mendelssohn’s First Piano Concerto with Mito Chamber Orchestra/Seiji Ozawa and selections from Songs Without Words. This is her 10th CD, since her first disc featuring the Chopin Études (accorded a five-star rating by Fono Forum Magazine). Yu Kosuge’s other recordings on Sony include Liszt’s 12 Études d´exécution transcendante, Chopin’s Préludes and Nocturne, Mozart’s Piano Concertos, Fantasie and Live at Carnegie Hall. Yu Kosuge’s plans include recording the Beethoven’s 32 Sonatas over the next few years.