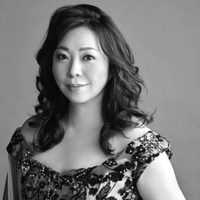 Throughout her career as a professional opera singer, Mihoko has earned a reputation as one of the best Butterflies in the world. Her performance in the role has received numerous accolades from both fans and critics. For example, Midland Symphony Orchestra wrote: “Kinoshita embraced the full range of the Butterfly character, and was thoroughly convincing whether expressing the shyness of a child bride, the joy of young love or the sorrow and grief of a wronged wife.” The hard-to-please Guardian notes Mihoko’s compelling Butterfly “rises fearlessly to the challenges of the second half of the drama.”

Today Mihoko is a sought-after Butterfly, having performed the title role worldwide, including but not limited to:

Although Butterfly is an important part of her career, Mihoko is also renowned for her performances as Verdian heroines, with her authentic and flawless Italian opera style she acquired through many years of training in Italy, including her stunning roles as Violetta in La Traviata, Leonora in Il Trovatore, Desdemona in Otello, Amelia in Un Ballo in Maschera, and as a soloist in Messa da Requiem.

Mihoko also continuously pushes her frontiers to expand her repertoire of work, as her life and professional experiences add more depth and a new dimension to her voice and performances. She performed Yani Rose at the world premiere of “New Arrivals” (2012) and Hana in “The Memory Stone,” both with Houston Grand Opera. In 2017, she will be performing the title role of Tosca at Nikikai in cooperation with Teatro dell’Opera di Roma, followed by the title role of Aida at Sapporo Cultural Theater under conductor Andrea Battistoni as the opening performance of the theater in 2018.

Her distinguished career started when she swept first prizes at “the three major voice competitions” in Japan in 2001: Italian Vocal Concorso, Japan Italy Vocal Concorso and Music Competition of Japan. Since then, she has won many prestigious awards, including first prize at the Licia Albanese Puccini Foundation Competition (2007), as well as second prizes at the Verdian Voice International Competition in Busseto (2005) and the Riccardo Zandonai International Opera Competition (2004). In 2005, she was honored with the New Nippon Steel’s “Fresh Artist Award” and in 2006 received Japan’s highest honor, the “Idemitsu Music Award.”

Mihoko was born in Kagoshima, Japan, where she earned her bachelor’s and master’s degrees at the Musashino Academy of Music. In 2001, she traveled to Italy on a Rotary International Friendship Scholarship, Recruit Scholarship, and Rohme Music Foundation Scholarship to continue her music studies at Accademia Santa Cecilia Opera Studio Renata Scotto class and Solti Opera Academy Mirella Freni Master class. The following year, Mihoko debuted in Tokyo at the Bunka Kaikan as Donna Elvira with Seiji Ozawa in Don Giovanni and as Mimi in La Bohème. In 2006, she sang a gala concert with the Toscanini Philharmonic, conducted by Lorin Maazel.

She currently lives in Houston, Texas, with her family.

Mihoko Kinoshita will be performing at our 2017 Spring Concert, for more info or buy tickets online (Eventbrite): visit here