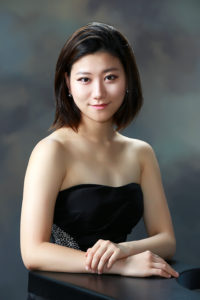 Mezzo-soprano Yeeun (Yenny) Lee is a fourth-year undergrad student at the University of British Columbia, majoring in Opera. She was born and raised in Korea, and her great love and passion for music lead her to Vancouver, Canada. She won awards in Kiwanise Festival and Nationals in Kelowna in 2014. Starting from Bard on the Beach 2014 as a role of Cesare from Giulio Cesare, she performed in various productions with UBC Opera including Rosette from Manon, Hermia from A Midsummernight’s Dream, Sesto from Giulio Cesare, Mother from The Consul, and Olga from Eugene Onegin. On February 2016, she traveled to Nürnberg in Germany with UBC Opera to present joyful excerpts from various operas.In July 2017 she traveled to Prague, Czech Republic to perform Il Barbiere di Siviglia as the role of Rosina in with European Music Academy, and in August she came back to Vancouver to present Rosina in the Bard on the Beach.

Yenny Lee will be performing at our 2018 Spring Concert.